Are you over 21?
Not Yet...
Skip to main content
Save big by building your own case - See more here 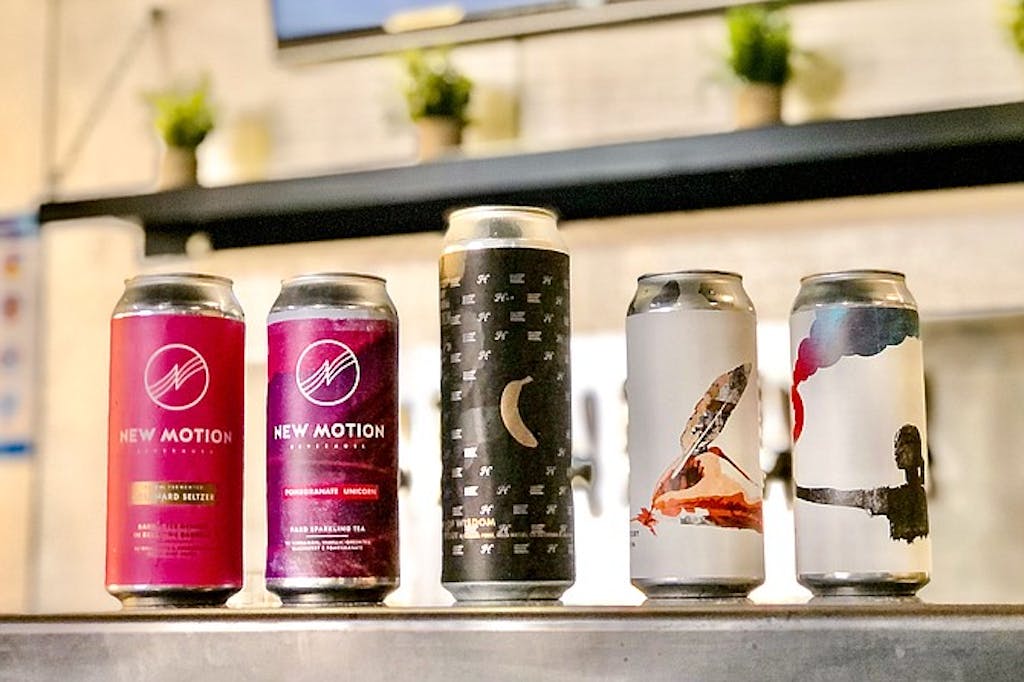 As the pandemic redefines how beer companies can do business, the brewhouse and frequent wedding venue was sold to a symbiotic pair of startups covering a range of brewed beverages, not just beer. The weekend before Thanksgiving, New Motion Beverages and Embolden Beer Co. held their dual grand opening at the renovated space.

New Motion Beverages has been in the works roughly four years, originally chalked up as a hard kombucha business by home booch-brewers and former college roommates and Andy Sist and Kyle Pool.

However, by the time it debuted in mid-November, New Motion was producing hard seltzer and a newer emerging beverage dubbed hard tea. In this case, the 5.5-percent alcohol tea is brewed from the same sugar wash as the hard seltzer. It’s then blended with either green or white tea to create a more complex, and caffeinated, beverage.

Sometime during the process of developing New Motion, Kyle tapped another friend, Cody Morris, as a consultant to get their brewing operation going. A veteran brewer who spent several years at Mission Brewery in East Village, Morris started evaluating turn-key opportunities for the project in February. The pandemic was under way by summer, when an equipment broker let him know 32 North was seeking a buyer.

The price was good, but the 20-barrel brewhouse was a little big for an alt-beverage startup. “We got a bigger footprint than we originally intended,” says Morris, but Pool had a solution: “He asked if we wanted to do a brewery.” They did. So, while quite a few local beer businesses have added hard seltzer and kombucha to their portfolios in recent years, this may be the first time we’ve seen it the other way around.

Morris launched Embolden Beer Co. with his cousin, Andrew Kelly. Morris and Kelly started home brewing together nine years ago, and by 2015, both were in the industry. Kelly spent several years brewing at Coronado Brewing Company before heading over to Mission Brewery himself, last year.

“Andrew and I had talked about long-term goals to kinda, hopefully, someday open a brewery,” recalls Morris, “but we weren’t sure how we would make that happen.” A few months after jumping on the turnkey opportunity, Embolden Beer was being poured: a handful of IPAs leading a variety of styles including a kolsch, pilsner, golden stout, and pastry stout. Morris says the goal is for half the brewery’s 32 taps to pour Embolden product, the other half New Motion.

Kelly serves as head brewer for both brands, with Morris as director of operations. Principal owners Pool and Sist operate as CEO and chief marketing officer, respectively. Morris notes they managed to retain to beer tenders from 32 North, and one brewer.

As for the brewery itself, they overhauled it with equipment upgrades and a fresh look, adding a lot of greenery. Because pandemic regulations are in effect, they partnered up with the Pizza Trolley food truck, and reclaimed a thousand square feet of parking lot to build a 3000-square-foot outdoor beer garden.

Meanwhile, the brewery purchase included a canning line, helping the two new brands jump immediately into retail. “We’re exploring distribution right away,” says Morris, “not waiting to pull the trigger,” as they might have under normal circumstances. He says initial distribution will favor Embolden Beer, as the New Motion portfolio continues to develop.

That said, cans of hard tea sold out during the venue’s opening weekend, and distributors have already expressed interest in the brand’s hard tea concoctions, which include Pomegranate Unicorn, made with green tea, pomegranate, blackberry, and cinnamon; and Apricot Bliss, a white tea beverage flavored with apricot, strawberry, and orange zest.

New Motion serves nonalcoholic versions of its teas and booches, and it isn’t done adding new hard beverages to San Diego’s menu. Currently in development is a line of hard ginger beer.